The AD4.320 amplifier is also unique, in my experience, in using a conventional, but very heavy-duty analog power supply with dual 30-amp transformers to power the output modules. Starke Sound claims that the AD4.320 combines the high efficiency of Class D circuitry with the warmer and more accurate sound of Class AB designs. Have they succeeded? Read on!

Four-channel power amplifiers are somewhat unusual. Most audiophile amps are one or two channels per chassis. Home theater amps have three, five, seven, or more channels to match the number of available channels on the movie soundtrack. In this review, I decided to strongly test the Starke Sound claim of audiophile performance in stereo from their Class D modules. All other manufacturers that I’m familiar with purchase their Class D amplification modules from other companies (B&O ICE modules are common, as are Hypex NCore modules) and then build their product around that company’s pre-selected, modular output cards. Starke Sound doesn’t do this. Their NS-600 Class D modules are designed and built in-house. 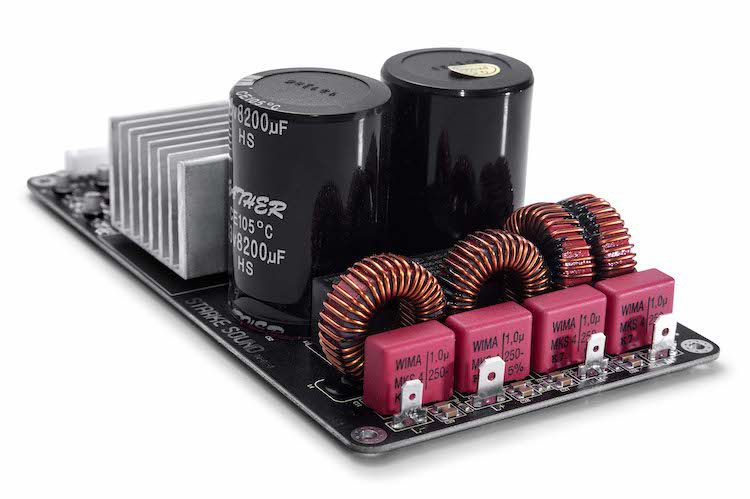 The Starke AD4.320 Power Amplifier is an unusual product. Multi-channel amplifiers are normally offered without bridging capabilities but the AD4.320 takes a different approach. The four available channels can be configured as two, three, or four discrete channels via bridge switches on the back panel. This makes the amplifier more flexible than the usual multi-channel amp, and offers (highlyunusually) two-Ohm stability, even in bridged mode!

To make the AD4.320 so flexible, Starke Sound uses not one but two toroidal transformers and two stereo Class D modules in the same chassis. Conventional audiophile wisdom is that Class D amplification, while offering the benefits of cool operation and high power efficiency, is just not good-enough sounding for home audio use. And up until recently, pro amplifiers from such manufacturers as Crown and others proved the conventional wisdom. However, newer Class D amplification units like Hypex’s NCore and Emotiva’s PA-1 amplifiers have shown that the best of Class D amplification CAN indeed compete with Class A and AB amplifiers on the basis of audiophile sound quality. 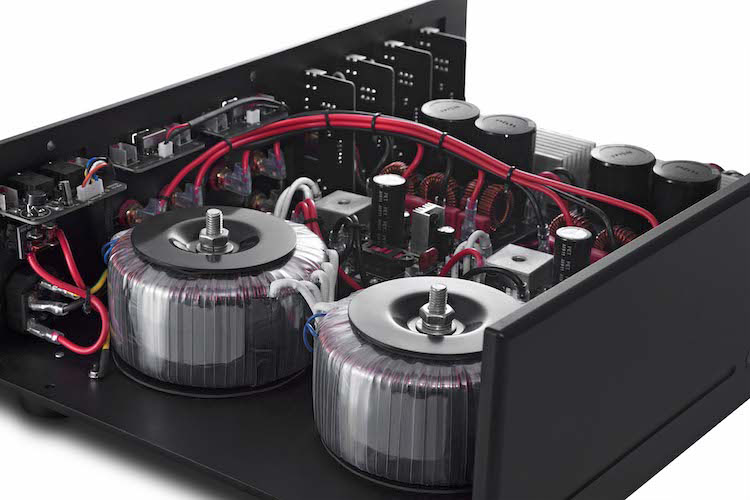 Since I had previously thought of Starke Sound as a loudspeaker manufacturer, the high quality of this power amplifier is an even greater surprise.

The Starke AD4.320 Power Amplifier comes well packed, in a protective sleeve; and with a spec-sheet, owner’s manual, and warranty card. The owner’s manual clearly describes how to configure the amplifier, and users (as always) should review the manual.

Most of the power amplifiers I have owned that offered bridged operation required that a bridging switch be activated and that the speaker load be connected between the two positive (red) speaker terminals for the two bridged channels. In other words, no connection to the negative (black) speaker terminals was normally used.

But the Starke amplifier, by contrast, uses internal switching such that bridged operation requires speaker connection to the positive AND negative terminals of the single bridged channel. The adjacent channel terminals are not used at all. This is unique, in my experience, although I understand it is very common for car audio. In any case, Starke Sound has dummy-proofed this amplifier by disconnecting the terminals of companion channels in bridged mode, so that even if the user mis-wires the outputs, the amplifier will not be damaged. 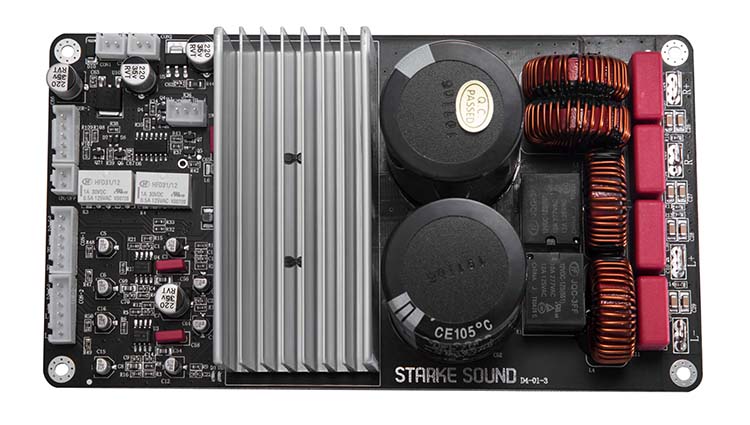 The AD4.320 can be run as a two, three, or four-channel device. The options are as follows: 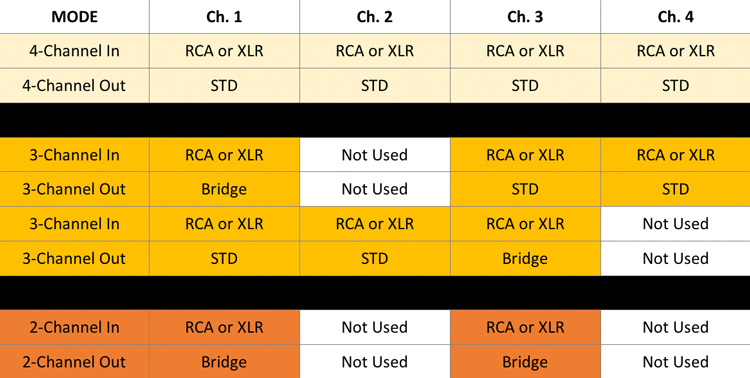 In four-channel mode, one can run up to four different speakers.

In three-channel mode, a high-power bridged channel can be used to drive a center speaker, and the remaining two independent channels can run the right and left front, side, or rear speaker pairs.

In two-channel mode, a pair of speakers can be powered with:

What is unique, to my experience, about the Starke Sound AD4.320 amp is that no matter how you configure it (bridged or not) the voicing remains the same! All previous amplifiers that I’ve owned or reviewed changed their sound significantly in bridged mode. But with the Starke AD4.320, I could not tell by listening whether the amplifier was bridged or not.

Setup for the Starke Sound AD4.320 was simple. The 28-pound chassis was light enough to lift, the dimensions fit my equipment racks with room to spare, and the small amount of heat produced by the amplifier was negligible. I also took the option of connecting my DAC to the unbalanced inputs of each channel and my Blu-ray player to the XLR inputs of each channel. By doing so, I could effectively use the power amplifier for source switching and eliminate a preamplifier from the signal chain completely. Of course, to do this, both sources were required to control their own volume.

The AD4.320 amplifier uses but 14 watts at idle, and when turned to standby mode (only the 12VDC trigger monitored), the power consumption drops to 8 watts.